After years of having celebrated exhibits and developing projects together, Galeria Senda brings to light the second edition of Russian photographer Oleg Dou’s first monograph, introducing us to his new series produced between 2012 and 2016.

The first edition was published four years ago, when Dou was 28 years old. This includes some of his most remarkable works, such as Cubs (2009 – 2010) which demonstrates the results of curious mutations, the ghostly series Nuns (2006 – 2007) and the unsettling and experimental series Another Face (2011).

Oleg Dou says he uses photography as a medium to allow the spectator to enter a world that ranges between “what is beautiful and what is repulsive”. He is fascinated by the curiosities of the human face and the limits between reality and what is behind it, rendering that which is strange and different as a base of his aesthetics.

In our second edition, a new series called Mushroom Kingdom is presented. Here Dou demonstrates the adorably haunting faces of childhood, which, according to him, is  a time “full of clowns and monsters under the bed”. He also introduces the piercingly elegant series Heaven in My Body, which gives off traces inspired in the sacred and mystical art of the XV and XVI centuries, especially Madonna with a child (c. 1452). Currently, some of these works, within others, are being shown in the exhibit “Lonely Narcissus” in Moscow.

28|32 is the first monograph of this young artist, but it will not be the last. As the gallery owner Carlos Durán says in the prologue, “many other [of Dou’s monographs] will be brought to light in the years to come.” It is clear that Dou will continue to promote and develop his work and will never cease to surprise us. 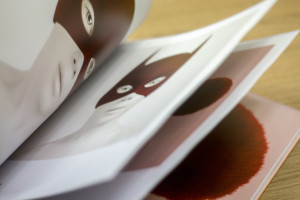 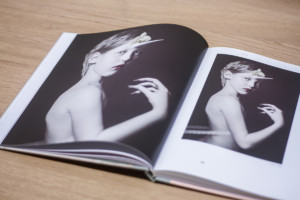