In 1982, IFEMA commissioned Juana de Aizpuru, thereafter Juana de Arco, to launch the first edition of ARCO, the international contemporary art fair in Madrid. The first edition was inaugurated in February 1983 in a two-story building at the end of Paseo de la Castellana, past Plaza de Castilla, which was later demolished to erect a new building. I was lucky enough to participate in that first edition, which was very different from the current ones. Initially, far fewer galleries participated and the public was also smaller, not to mention sales that were practically nil.

The first two editions, as I said before, took place in the Paseo de la Castellana building and without a doubt, were quite neglected for all the participating galleries, which were still very few. People in Spain were not used to art fairs. I remember one year, I think it was the second, that Juana de Aizpuru came to our booth and asked me if we had a red dot, wow she had sold !! I told her that I had little faith, that how could she go to an art fair without red dots, but she, who was very smart told me: look dear, the red dots, in this fair, with one bringing them for the whole building is enough. And, unfortunately, she was right.

In 1985, ARCO moved to the Palacio de Cristal de la Casa de Campo, larger and with better facilities, and important foreign galleries also began to participate. The public began to be much more abundant, actors start to attend, television presenters come, some truly interested, others simply to be seen. On weekends, collectors and art lovers from outside the capital are received, as well as entire busses of Fine Arts students from all Spanish cities.

I remember that in the first editions they used to give public announcements with the loudspeaker like: the director of the gallery X is requested to immediately attend in his stand, something quite annoying and that fortunately later disappeared. One day a well-known actress was taking a tour of the fair. Impossible not to notice her. She wore a blouse two sizes smaller than her size, a huge belt, what she was wearing could not be called a skirt, and shoes with heels that provoked vertigo. And suddenly the speakers were announced: The young lady (name of the actress) is asked to stop by the stand of Gallery X. And not once, but several times. So, if someone had not seen her walk, well, everybody already knew that she had been at the fair. Good publicity and also free.

ARCO has always been opened by the kings who visit some previously selected stands. In 1996 it was our turn. After a strict control and registration of the stand, security gave the go-ahead and Queen Sofia visited us. That year we presented a monograph by Gino Rubert and the visit was very entertaining. The queen stood before each work and asked Gino questions, who explained everything she asked for. Suddenly she stares at some artwork and addressing Gino she says: she looks like Irene Papas. In case someone from the entourage did not know who it was, she added. She is a wonderful Greek actress.

We could continue telling anecdotes that arose during the 38 editions of ARCO, talk about the galleries that have participated and the artists that have shown their works, but the best thing of all is to visit it, be there. I invite you to do it, surely you will not regret it. 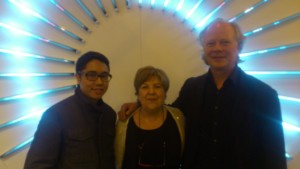 Chus Roig in company of the artists